How to identify counterfeit ICs

Now most designers and PCB assembly manufacturers concern about the likelihood of increased counterfeiting as a knock-on effect of the chip shortage.

Because the incentives for counterfeiters are high right now, as an industry we must be somewhat more vigilant in maintaining our best practices for preventing fake parts from corrupting the supply chain and our products.

Under normal circumstances the cost associated with counterfeit electronic components exceeds $5 billion annually. The pressures of the current chip shortage will likely push those losses even higher for as long as the supply remains tight. Still, we all can agree that, if fake parts were to enter your inventory or end up in your products, while the reputational damage to your business will likely be significant, it can also be tough to quantify. Even harder yet would be assigning cost should counterfeit components in critical applications contribute to injury or loss of life.

So, how about a little refresher on some of the most effective techniques for component inspection using X-ray? While other visual inspection techniques provide important insight into component quality and authenticity, nothing exceeds X-ray inspection for fast, accurate, non-destructive evaluation. The following are 10 ways to identify a fake IC using X-ray.

It is only with 100% inspection that you can be sure all the components are good.

Criminals commonly mix good and fake devices in the same packs or batches to avoid detection. I am sure you can see which one is out of place in Figure 1.

Comparing incoming parts with a golden sample is a good way of searching for counterfeits. Figure 2 illustrates how different two devices from a single batch look. To compare accurately, check the lot code, the date code, the part numbers, the place of manufacturer, any external markings, and the construction of the device.

Figure 2: Illustration of how different two devices might look from a single batch. 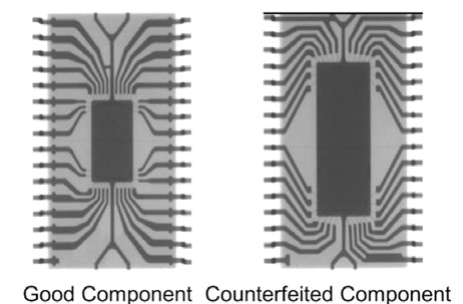 Figure 3: Example of a discrepancy in the VPP and VDD pins.

An X-ray image can show missing wire bonds,indicating potential for counterfeit and the needfor further analysis. However, beware that aluminum wire bonds do not show in X-ray images, sothis could produce a false fail (Figure 4). 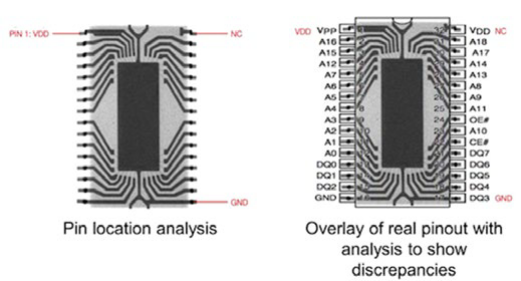 A full inspection of a part can validate mechanical integrity. For example, in Figure 5 a wire bond ball and a loop can be seen inside that package.

This doesn’t confirm the component is a fake, but it should sound alarm bells.

Figure 5: A wire bond ball and loop inside a package should sound alarm bells.

External defects are a pointer to improper handling of a component. Figure 6 shows aball grid array (BGA) component with damaged solder balls. This type of damage is common when components are not packaged in the original tray, tube, or reel provided by theoriginal manufacturer. Even if the component is deemed good by other tests, the fact that the parts are in the wrong package makes them suspect counterfeit. Figure 6: Example of a BGA component with damaged solder balls.

Perhaps not seen strictly as counterfeiting, components are often pulled out of old boards,cleaned, and resold as new. Even if the parts are real, this process can make the parts sub-standard. However, when criminals pull ball grid array (BGA) components from boards, they need to have the parts re-balled.

The re-balling process is not trivial. The metallurgic interface between the component and the new balls is no longer pristine (as it was when the first balls were applied onto the virgin pads of the component). For this reason, it is common to find recycled BGA components with excessive surface voids.

In Figure 7, the bare component shows a large amount of voiding that indicates a part that was pulled and re-balled. 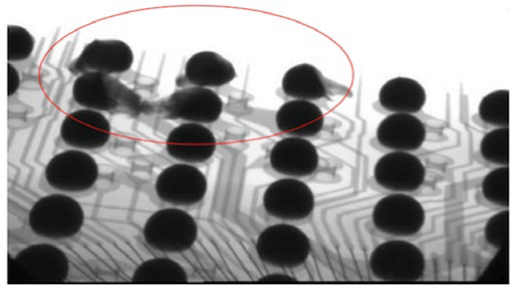 Figure 7: An example of a bare component with a large amount of voiding.

An indication of improper storage of components is bent pins (Figure 8). This X-ray inspection can be done with the components still inside the tray, so they don’t need to be removed from  the package for a suspect counterfeit determination to be issued. Not only are trays of the wrong size often used, sometimes the trays with the wrong material are used. In these cases, instead ofusing the proper material to deal with ESD, counterfeiters replace it with lower cost options. These lower cost material options can damage the parts. 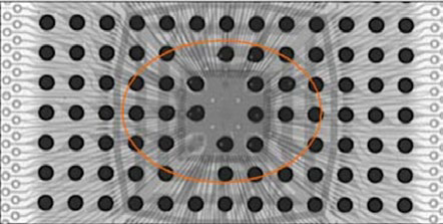 Figure 8: Counterfeiters will replace the proper material with lower-cost options.

Electronic component manufacturers invest heavily in the consistency of the products they sell. If a few of the components within a lot have anomalous die attach voiding (Figure 9), suspicion is drawn to the overall quality of the part and the lot. It may not have been stored in appropriate thermal and humidity conditions or may have been salvaged.

With incentives at an all-time high for counterfeiters, it’s a great time to review your receiving practices to ensure that you are keeping fakes out of your inventory and products.

A little extra vigilance can protect your brand, your customers, and help beat the bad guys.

What do PCB puzzle skills mean? What is the definition of a PCB puzzle?

PCB jigsaw is only for the convenience of production. For the board manufacturer, his base material is generally relatively large. Many boards are made at a time, and then cut off one by one. If the jigsaw is mainly used for welding production, imagine a What types of PCB inks are used in PCB manufacturing?

What software is used for PCB design?

PCB design is based on the circuit schematic diagram to realize the design of specific functions on the PCB board. A simple classification of PCB